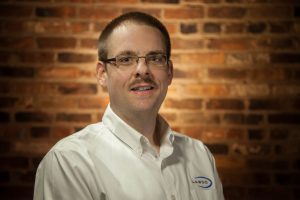 Baer Promoted to President of Lasco

Marquette, MI – Lasco is pleased to announce the promotion of Robert Baer from Interim President to President effective June 1, 2018.

“I’m extremely excited to start the next stage of my long-standing career here at Lasco,” said Mr. Baer. “Lasco has always been a very strong company with a great staff and I couldn’t be happier to have been chosen to lead our great team to continued success well into the future”.

Prior to being the Interim President, Mr. Baer held various positions at Lasco during his 22 year career with the company.   Mr. Baer started his career at Lasco while still in high school as a part time Computer Operator in 1996. Post high school graduation he continued to work in computer operations while attending Northern Michigan University when he moved to a full-time position that combined his computer operations duties with various I.T. positions. In 2003 he was selected to be Lasco’s Check 21 Image Processing Manager. During this time, he managed Lasco’s Check processing center and was responsible for installing, configuring, training, and deploying Lasco’s new remote branch capture solution to 12 different financial clients over a two year span, while helping in various other bank conversion projects.  In 2009, Mr. Baer was promoted to Vice President of Bank Services where he started to manage client relations, provided support in new product sales and implementations, assisted with contract renewals with both vendors and clients, and jointly managed all the bank services support staff.    Mr. Baer was promoted to Senior Vice President of Client Management in 2014 which led to additional opportunities for him to work more closely with Lasco’s client senior and executive management teams and, deepen his involvement in contract renewals, budgeting, marketing and assisting with compliance. In October of 2017 Mr. Baer was appointed Interim President of Lasco. During the last several months, he has taken on the duties associated with the President position including managerial responsibilities of both the bank service team and I.T. team, continuing to focus on building tighter client relationships, provide additional oversight for financial and human resources, and working closely with Lasco’s Board of Directors.

“Robert has been doing exceptional work transitioning into the President position over the last several months.   The Board of Directors has full faith and confidence in his continued efforts into the future.” States Lasco’s Chairman of the Board, Rick Nebel.